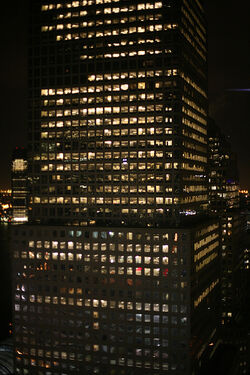 The Vampire sphere on Dark Forces MUSH is based primarily off the Second Edition ruleset, and knowledge of the various Clanbooks is encouraged, though by no means required. Some of the stranger or rarer Clans (Kiasyd and Blood Brothers spring to mind, among others) will be considered on a case-by-case basis, but will draw heavier scrutiny during the app process. Please feel free to contact Malkav with any questions or concerns in this area.

Up until April of 2009, the Kindred of Crystal Springs had to be very, very careful with their dealings, as the local lupines were actively hunting them. However, in March of that year, said werewolves were almost completely wiped out in a battle of some sort involving the local willworkers and some... Thing. Details are sketchy and hard to come by at best, due to nearly everyone who was a witness now being very dead, but it can be surmised that the wizards did as they tend to do and delved too deeply into things they did not understand.

This has created something of a power-vacuum, which the Kindred were quick to exploit, establishing a power base while the local lupines and mystics were still recovering from their losses. However, while the Kindred that come to Crystal Springs enjoy a bit less paranoia than perhaps is normal, the uneasy truce with their external enemies is precarious at best, and all too likely to come crashing down at the first misstep or sign of weakness.

As if this weren't enough, there is something at work within the city. Vampires sometimes find themselves stalked, and some outright vanish, but whether this is a group of actual hunters or something else has yet to be ascertained. The Prince, for reasons of his own, usually does not immediately inform newcomers of this little wrinkle, apparently wanting to see if they're smart and observant enough to be worth the effort.

Lord Aaron Godwin
He's a Ventrue with his fingers in quite a few pies, and who's been in this city since it was a smudge on the map in the early 1940s. Currently has a "working relationship" of sorts with the local lupines, as well as apparently having a hand on Baldwin Technologies and Sciences, Inc and Grey Incorporated, just to name a few of his contacts. He's a rather even-tempered Prince, patient, willing to let most Kindred in the city go about their business, provided all the Traditions are observed properly. A regular at Elysium (not surprising, given it's held at his penthouse), he's not one of those that perches atop his ivory tower and sneers at the lower classes below. But don't think that means you can treat him like an equal. Plus he has openly declared that any Kindred to start a fight with a lupine is on their own, and will probably get what they deserve.

The current Elysium is held in Lord Godwin's personal penthouse within the Williams Building in Highcliff, overlooking the nearby river. The more gentrified Kindred are free to enter through the front door and main elevator, but those with lower standards (this rather pointedly includes Nosferatu without sufficient means of disguise) are "encouraged" to seek admittance through the underground service entrance; a ghoul will be on hand to sneak them up without fuss.

There is surprisingly little organized Sabbat activity within Crystal Springs, the Camarilla holding full (official) sway over the city and surrounding environs. That isn't to say that there aren't a few isolated packs hiding in alleyways and suchlike looking to cause trouble, but they are in the distinct minority, with no true influence outside of attempting to bash folks over the head if they don't like them.

Note: The listings below are expected to change over time through PC actions. A minor clan may become more powerful, or vice versa, and each clan's situation may vary on a moment's notice. Your character's actions may very well cause massive upheavals within the local power structure.

These are the clans that are either most populous at Crystal Springs, the most politically active, or both.

Gangrel
The relatively nature-friendly setup of Crystal Springs has drawn a fair share of the Outlanders to the area, if not necessarily the city, giving them plenty of wilderness to claim as their own, though they're as wary as any about infringing on the territory of the moon-beasts.
Tremere
The Warlocks are known to frequent Crystal Springs, though they are as close-lipped about their motives to outsiders as ever. It can be surmised, however, that there's something about either the city or its location that has caught their attention...
Ventrue
What with the current Prince being Ventrue, the Bluebloods have something of a leg up on the other clans in the region, though it has been noted that Lord Godwin does not show his "brothers" any leniency if they should misstep. If anything, he judges them more harshly. They should know better, after all.

These clans have a relatively minor presence in the city, either due to low population or not bothering themselves with what's going on outside their own cares.

Brujah
The Rabble show as little care for beauty as ever, and largely seem to ignore Crystal Springs due to the lack of chances to get into fights. A few rumble through every now and then, hunting Sabbat or the chance to punch a werewolf in the groin.
Malkavians
The Lunatics seem oddly drawn to this city, though they show as little recognizable organization as always. Many speak of having strange dreams or hearing strange voices while in the area, and often move on again before too long. How much of this is because of something actually in the area or simply another of the Kooks' ideas of a joke is up for grabs.
Nosferatu
There is... something, in the sewers of Crystal Springs. Something that makes even the Tunnel Rats twitch and hide. They're not sure exactly what it is, or where, but they know they don't like it.
Toreador
The Artists are not exactly a rare sight, but neither do they seem to much care for Crystal Springs' political climate. Still, there is enough of a focus on art and culture within the city to give the Clan of the Rose something to amuse themselves with, even if the current cold war with the lupines leaves them with a poor taste in their mouth.

Any Kindred of the following Clans are almost certainly in Crystal Springs on their own, for whatever reason. Please contact Malkav before attempting to app any of the following to make sure the character concept is sound.

Assamites
There's little work for the Assassins in this city, though one or two sometimes wander through along the way to someplace else.
Daughters of Cacophony
Practically unknown, any Sirens in the city are apparently keeping their own council.
Followers of Set
The Serpents, much like the Malkavians, seem drawn to Crystal Springs, but usually leave even more precipitously than the Lunatics, usually after poking their noses into things they ought not have.
Giovanni
The Necromancers find little welcome in this city, either from the local populace or from the Prince, who has shown an open dislike of the Clan as a whole.
Lasombra
The Keepers are stealthy and careful even in cities where they are not regarded as criminals by default. If any are in Crystal Springs, they're being circumspect.
Ravnos
Gypsies come and gypsies go, but where they'll stay, nobody knows...
Tzimisce
The Fiends enjoy even less welcome than the Lasombra, given their "disgusting" tendencies to twist themselves and their "pets" in ways that violate even vampiric sensibilities.

Cathayans
The Kuei-Jin, or Eastern vampires, are a mystery to their Cainite "cousins." Very, very little is known about them, and some Kindred don't believe they actually exist. As far as anyone knows, there's never been one in Crystal Springs.

Retrieved from "https://darkforcesmush.fandom.com/wiki/Vampire_Sphere?oldid=25474"
Community content is available under CC-BY-SA unless otherwise noted.