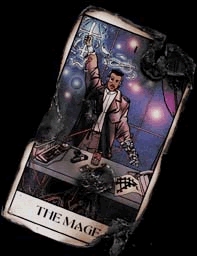 Our Mage: the Ascension sphere follows the general Mage 2nd Edition Core Rulebook, and most of the rules and expectations of in-game knowledge come from this. Thus, the Avatar Storm and related changes are not in place. Though the various Tradition books are by no means required, they are certainly encouraged.

There was formerly a small Chantry in the area consisting primarily of the Cult of Ecstasy with a handful of Dreamspeakers. For a long time, they had known of the force lying beneath Crystal Springs, a vast source of dormant power. They experimented and tested and got a little too close for comfort in their explorations; the local garou found out about their presence and the two groups clashed for a good long while. In the early 1990s, however, a truce was reached and a compromise made. The Mages agreed that, while they would not completely cease what they were doing, they would not risk going too far.

In late 2008, in a series of events that lies only in the graves of those who did it, three Mages broke their word to the garou. They pressed a little too much, and managed to wake up a huge Bane that had been slumbering beneath the Springs. It destroyed two of the Mages, and the third got away to warn the others before succumbing to his injuries. What resulted was a horrible battle that nearly wiped out both Garou and Mage alike, and the city supernatural population is still striving to recover. Many of the Garou still blame the Mages for their part in this catastrophe (and rightfully so).

As a result, the Chantry disbanded and scattered. Conflict is no longer imminent, but the garou tend to eye any Mages with dubiety. With so little in the way of numbers, what few Mages that remain in Crystal Springs have largely withdrawn into their own lives, and there is little to no unifying structure among them for the moment.

Given how few mages there are within Crystal Springs and the lurking distrust (and in some cases outright hostility) of the local lycanthropes, there isn't really much in the way of organization. Individual mages seem to be keeping their own council for now...

Retrieved from "https://darkforcesmush.fandom.com/wiki/Mage_Sphere?oldid=22930"
Community content is available under CC-BY-SA unless otherwise noted.