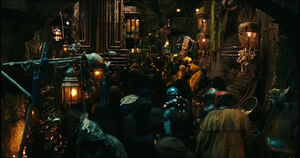 The City of the Crystal Springs, located within the Kingdom of Grass, is something of an anomaly in the Changeling world. It has no established High Court, instead "governed," if such a term can be used, by a loose agreement between whatever Commoners happen to be living there at the time. And while a noble or two does tend to poke their nose in every so often, they are treated much the same as everyone else, albeit with a bit more politeness and respect. Perhaps it is something of an experiment among the gentry. Perhaps they simply haven't thought to do anything about it. Or perhaps it is because of what resides therein.

Note
These are current IC conditions, not meant to be discouraging to the apper. If your type of Changeling isn't prominent in the city, please don't feel like that means you can't app it.

It should be noted that there isn't a huge Changeling population in Crystal Springs. Most are passing through, coming to see the Market then go on their way. Those that do linger seem to have a reason to do so. The odd set up of the society there leads to a love-it or hate-it sort of reaction.

The Courts are fairly evenly represented in the city between the Seelie and Unseelie, and both are certainly welcomed in. The Houses are less represented, if at all, as most of those in houses tend toward societies with more structure. Seemings are a bit Wilder-heavy, but Grumps and Childings show up here and there.

Boggans
Tend to stick around. Lots of affairs to meddle in, help and advice to be given, they feel so needed here.
Eshu
These types tend to come and observe for long stretches, some even make it their home. There's just so much to be fascinated by, stories to tell later.
Nockers
Nockers are low in number, tending to be annoyed by the rowdy nature of the city. Damn kids playing their loud music in the middle of the night!
Pooka
Pooka just love this city. So many odd types to poke around at!
Redcaps
Currently, Redcaps don't seem to be represented in the city. If there's any around, they're keeping to themselves.
Satyrs
One of the most prominent kiths present, drawn in by the Market and the free nature of the city's rulerlessness.
Sidhe
Many Sidhe steer clear of Crystal Springs, as it seems resistant to actual court step ups and formal society. Only the truly curious tend to linger.
Sluagh
Quiet and standoff-ish, this kith tends not to stick around, or if they do, they don't seem to partake of the general riotous behavior of the Market and the more wild fae around.
Trolls
Fairly populous around the city, the Trolls seem to find it rather welcoming.

The hub of the Changeling activity, and what tends to draw them to the city in the first place, is the Market. Nobody's really sure when the Market was started, or by whom. It has seemingly always been there, nestled deep within the city, for as long as anyone can remember. Of course, only those that can access the Dreaming know of the Market, since it is hidden behind a beGlamoured and spell-locked door that leads to a place that does not exist in mundane reality. And while the Changelings of Crystal Springs come and go, the Market always remains, populated heavily by denizens of the Dreaming itself, creatures that simply cannot exist in the choking Banality of the "real" world, offering goods ranging from simple foodstuffs to... wondrous things...

Some Changelings know of The Toothless Gryphon (owned by a satyr who goes by Rosalind Jaffe as her mortal name) as a Changeling-Friendly place, and Satyrs know they're welcome to come and play (look out for the Gift of Pan) anytime they wish. However, it's also known that the Mists are to be kept up around there, as the tavern is open to the general population as well.

Retrieved from "https://darkforcesmush.fandom.com/wiki/Changeling_Sphere?oldid=25457"
Community content is available under CC-BY-SA unless otherwise noted.